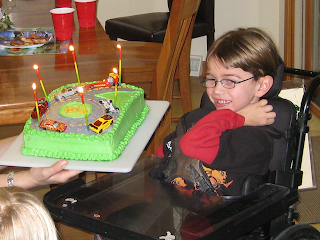 Happy Birthday Buddy! Kaden turned six yesterday. We had a party with Miki’s family on Sunday and Keden really enjoyed all the attention. He always loves seeing his cousins and the chaos of all of them together with he and his siblings.

We’ve had a new addition to the family since the last time I posted. Madison “Maddie” Stark was born on February 11th. Kaden, Kylie and Jacob seem to like her a lot and all of then have handled the transition really well thus far. Kaden took a picture of him and Maddie to school last week and boy was he proud to show it off. But, I wouldn’t expect any different from our Kaden man.

As Kaden turns six, I think back to all that he has been through and am grateful for where he is now. He’s a happy, intelligent, fun kid. He has been improving with his Dystonia, all be it VERY slowly over the last few months. It’s good to see progress, but frustrating that it comes so grudgingly. He takes it in stride and continues to do things that we haven’t seen for a long time, if ever.

His speech is probably the most noticable difference. He has been very limited in his speech over the last 4 years. We were lucky to get one or two words at a time and now every week he spews out a sentence of 4 or 5 words. The physical improvements have slowed. We upped his pump medication two weeks ago and are going to try and push to increase on a more regular basis until we see more noticable changes in his tightness. The problem is that going to fast may make him too loose in places like his face and neck, causing problems with eating. We want to avoid that at all costs.

Overall he’s doing well. We see his neurologist next week and I will post an update after that appointment.