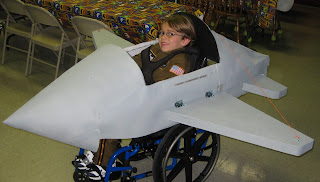 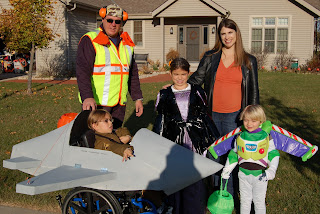 We had a great Halloween weekend! Kaden was very proud of his airplane. Again I think he likes all the attention he gets more than being in the plane. We all went to a Halloween party at New Berlin Therapies where Kaden does his therapy. They have a great haunted gym and Jacob and Kylie really liked the magic show. NBT is a great organization and we are lucky to have them.

We trick-or-treated for about an hour and 45 minutes this afternoon. I was pooped. Trying to keep up with Jacob who was, “Flying like BUZZ!”, was difficult to say the least. Thankfully Kylie helped a lot with Jacob. Thank you to Granna and Gramps for holding the fort so we could all get out for trick-or-treating for a little while.

Kaden Update: Kaden has been kinda tight the past 4 or 5 days. I think some of what we have been seeing is Kaden fixing in positions. As his muscles loosen his body doesn’t feel right to him. While he may be more comfortable he’s not used to his muscles not being really tight. So, he tenses on his own to feel what he thinks is “normal”. The good thing is that if he is “fixing” that means he can use those muscles without the involuntary tension and therefore can retrain them as he gets used to not having the involuntary tension.We’ll see how the next week and half go. Kaden has another appointment to see the doctor a week from Thursday. Probably another increase in dosage and see where we go from there.

Hope everyone had a safe and happy Halloween!